It is possible to extend the list of available feature sets by creating custom ones.

IMPORTANT: When creating custom feature sets for a production, make sure that it will be supported by the final game engine.

Note: If creating a custom feature set for UnrealEngine, Unity, Lumberyard, O3DE, AfterEffects, you will need to make sure expected features are supported by our plugins, contact us at support@popcornfx.com if in doubt.

This page will describe how to create a custom feature set compatible with a billboard renderer. This remains experimental so it is recommended to follow those steps exactly, you can reach out to us on our discord server if something doesn’t work as expected. 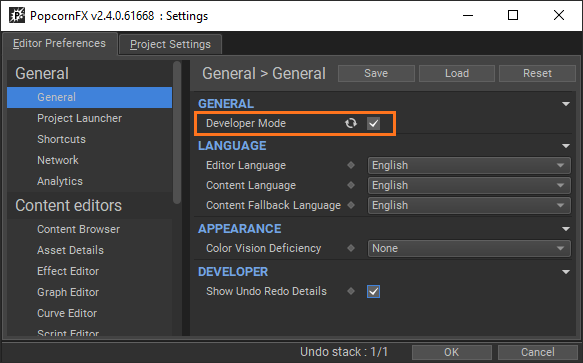 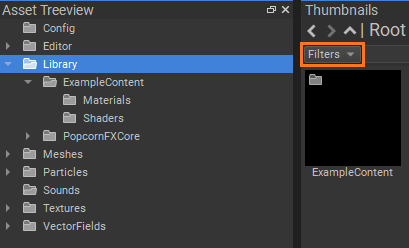 To make sure Materials and Rendering interfaces are visible in the content browser, you can select the “Filters” dropdown and enable required assets: 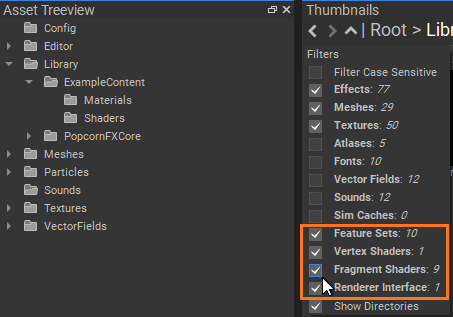 In this example, we’ll create a custom material from scratch for Opaque Billboard particles. This material will support the Diffuse from Editor.pkri, and can easily be extended to add support for additional custom features. 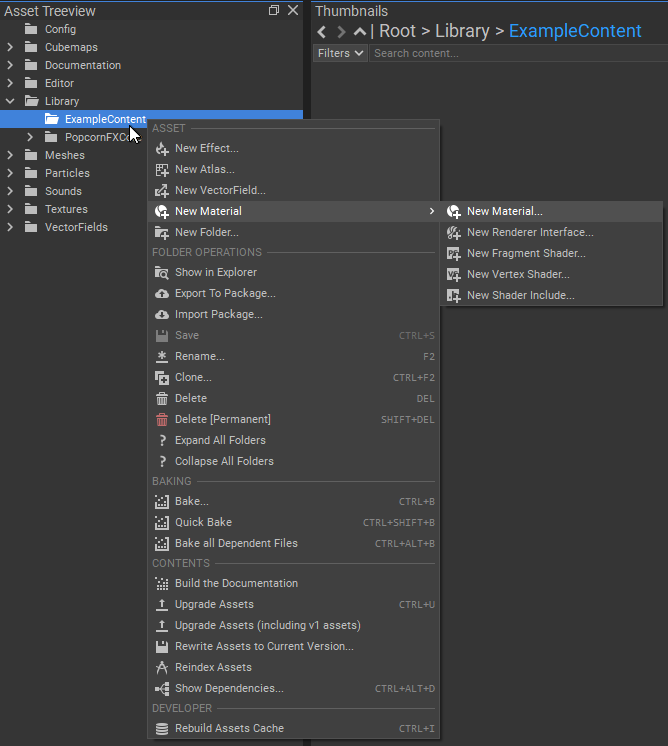 You’ll be prompted to name your material, you can uncheck “Open asset” for now. We’ll name the material Example_Billboard. 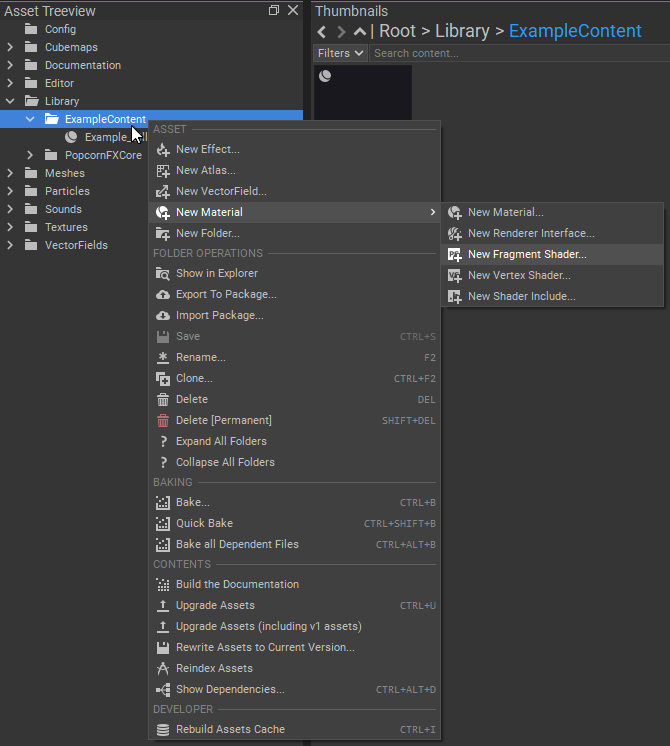 Now that the material and its fragment shader are created, you can open the .pkma file by double clicking it: 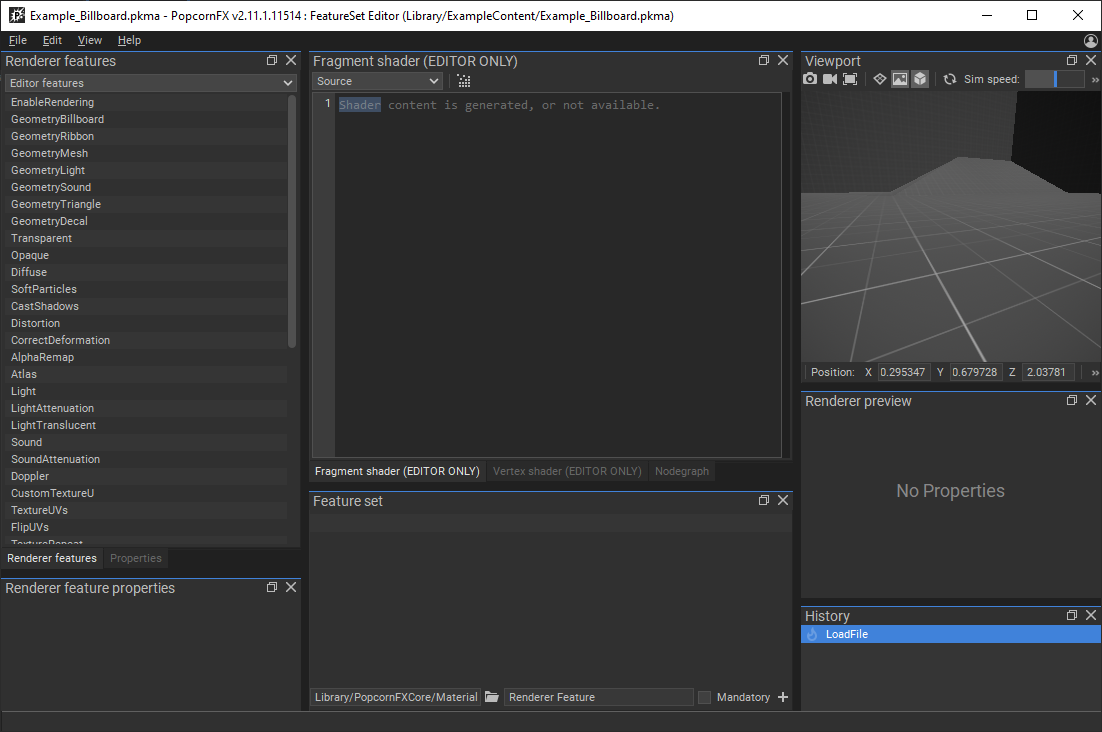 We have an empty material that has no shader assigned for now, this material is missing the reference “Geometry” rendering feature: 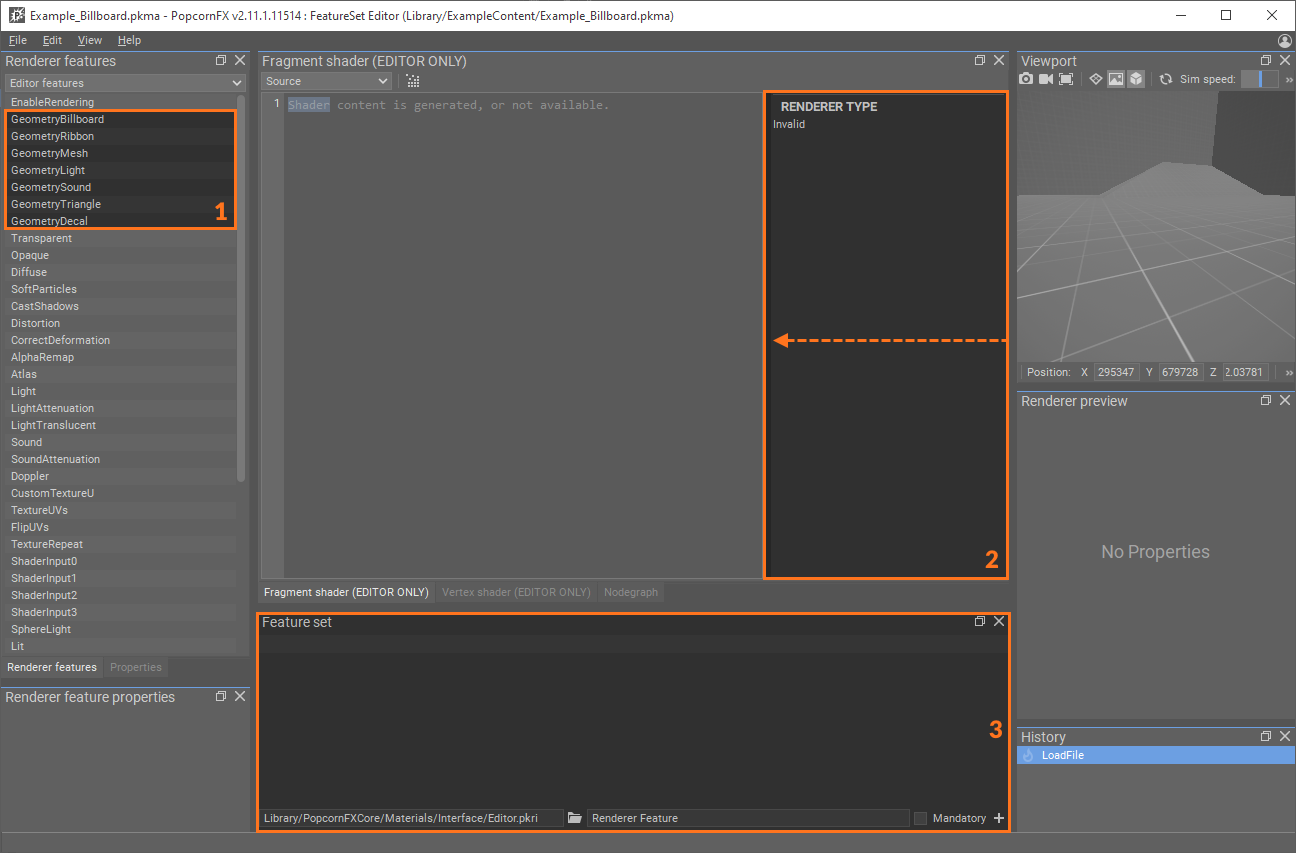 We have to add the GeometryBillboard feature to the list of feature this material has: 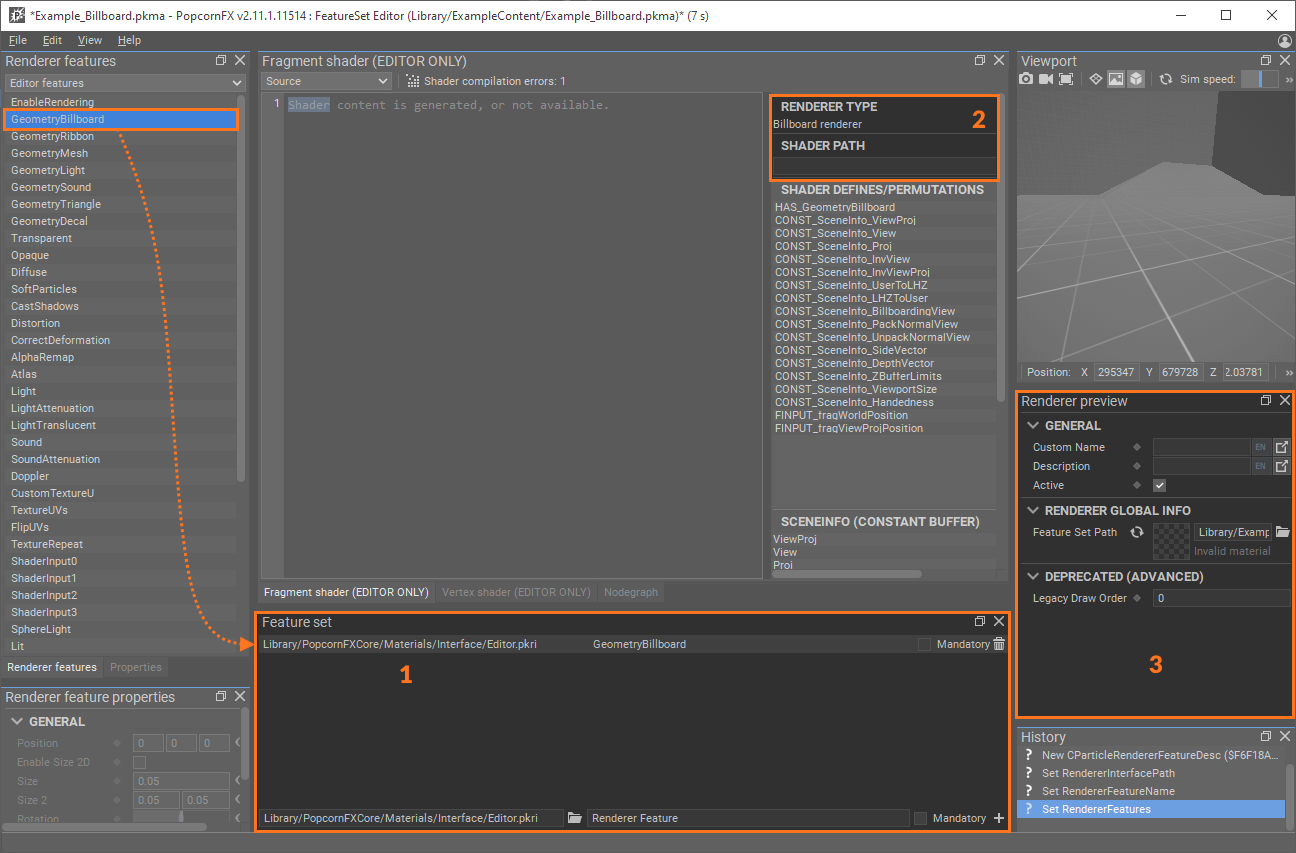 Additional features can be added: 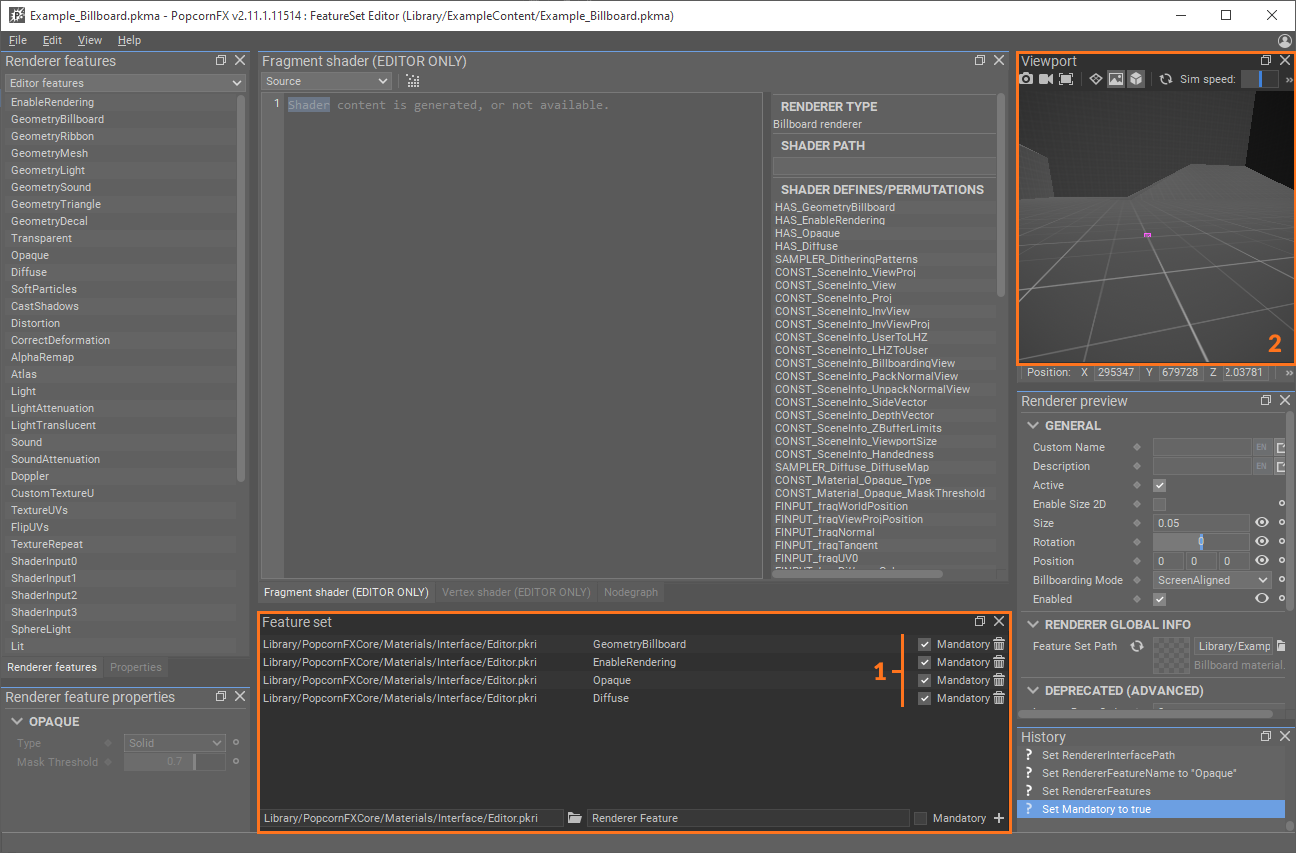 The material now needs a fragment shader to be specified: 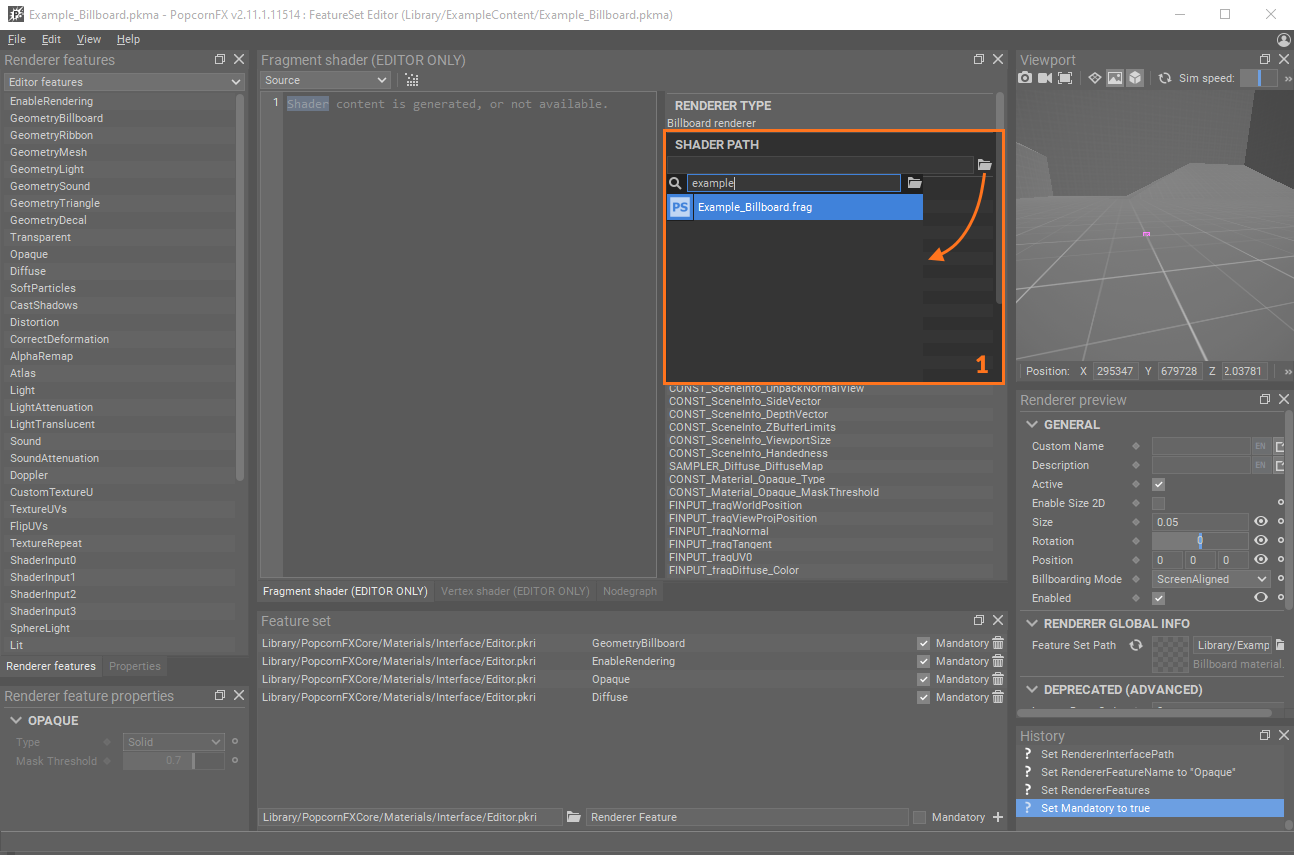 After picking up the newly created .frag, you’ll see the material still does not render properly, we have a compilation error: 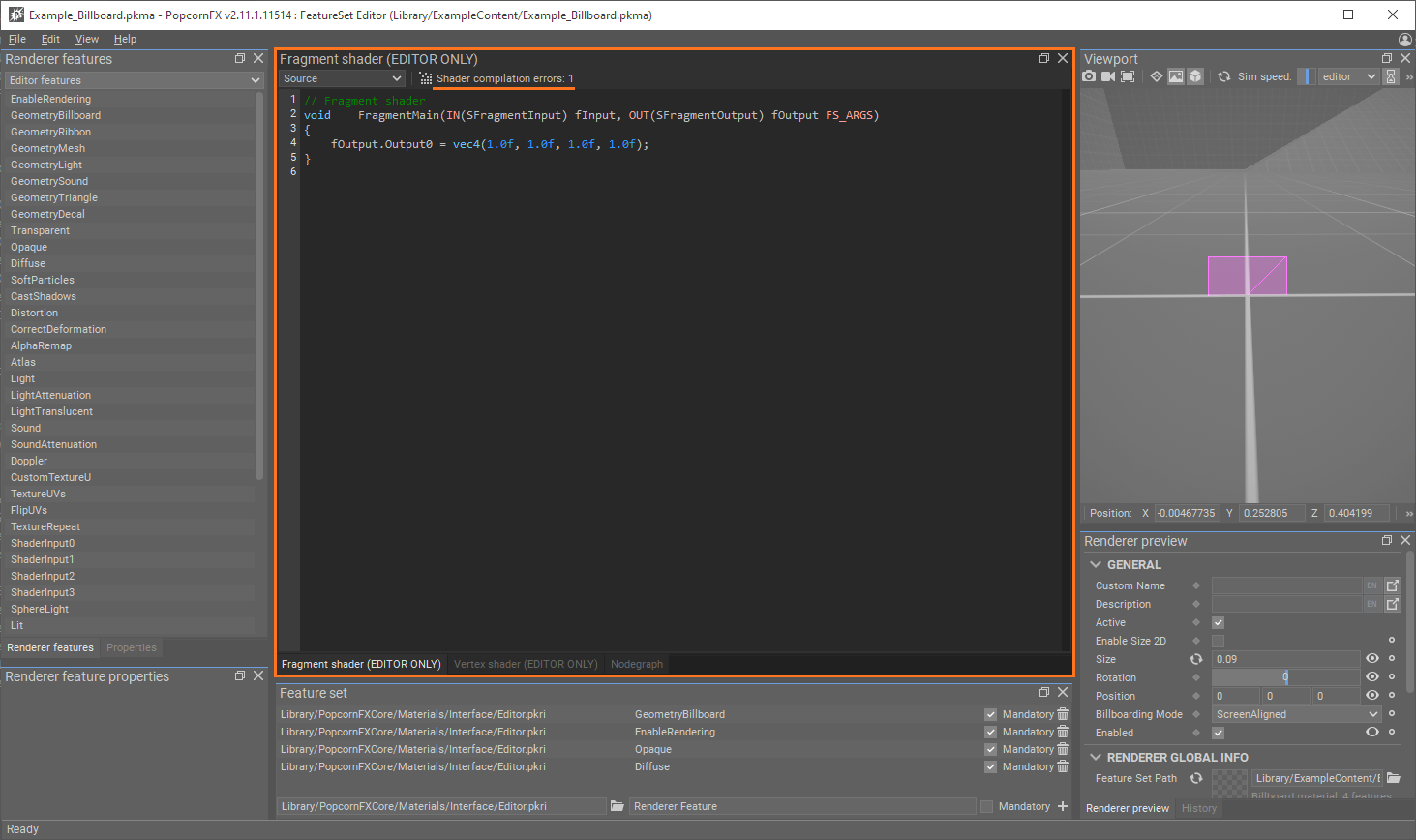 This is because Opaque draw calls need to output additional informations, and the generated .frag is invalid: 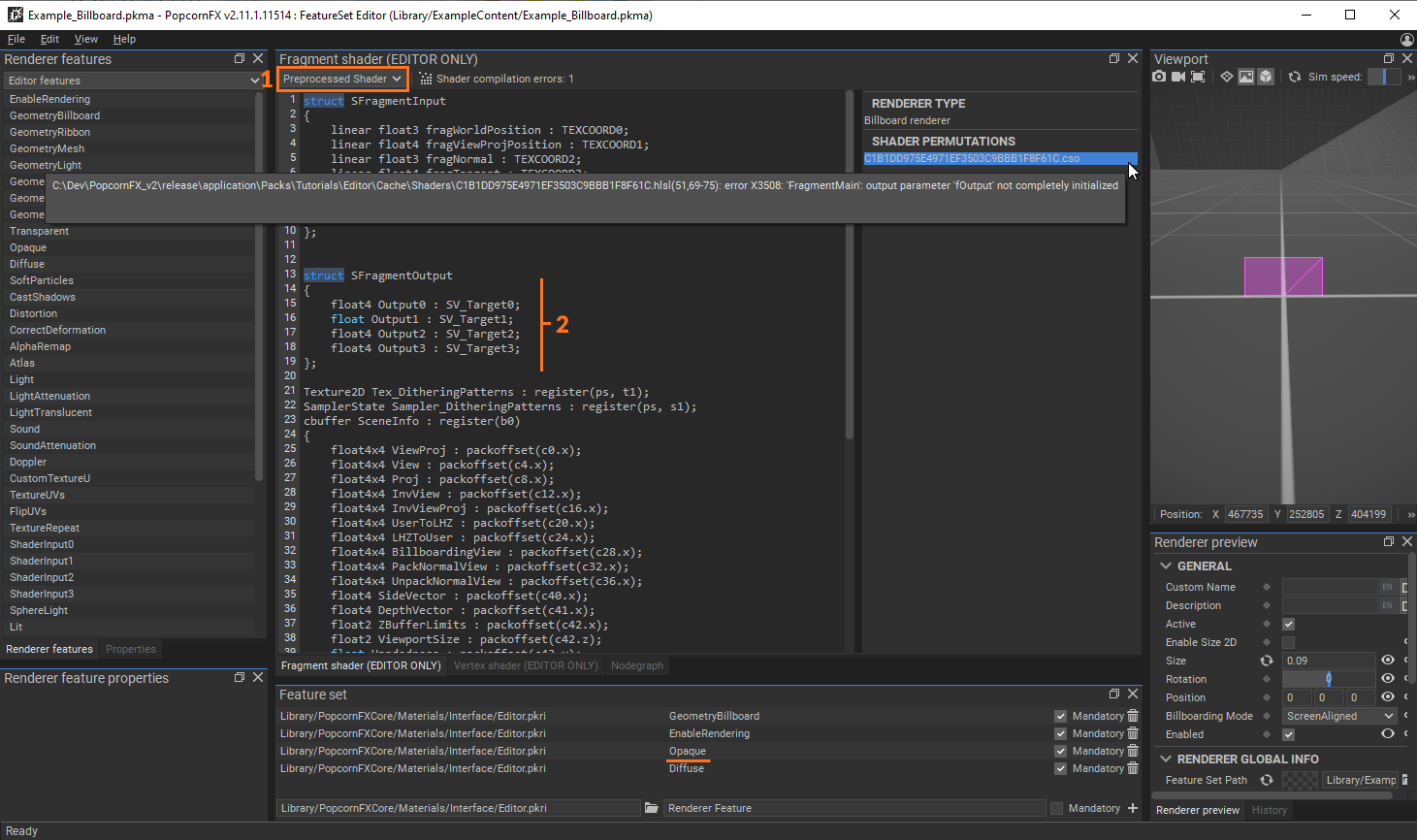 This is an issue that will be resolved in future PopcornFX versions: generated .frag files do not currently automatically work with non-transparent draw calls.

We can easily fix this by writing to all output values:

At this point our material actually renders on screen as Opaque so it can be used by billboard particle renderers in effects. We’ll augment the fragment shader a bit so it supports sampling the Diffuse texture and the per-particle color: 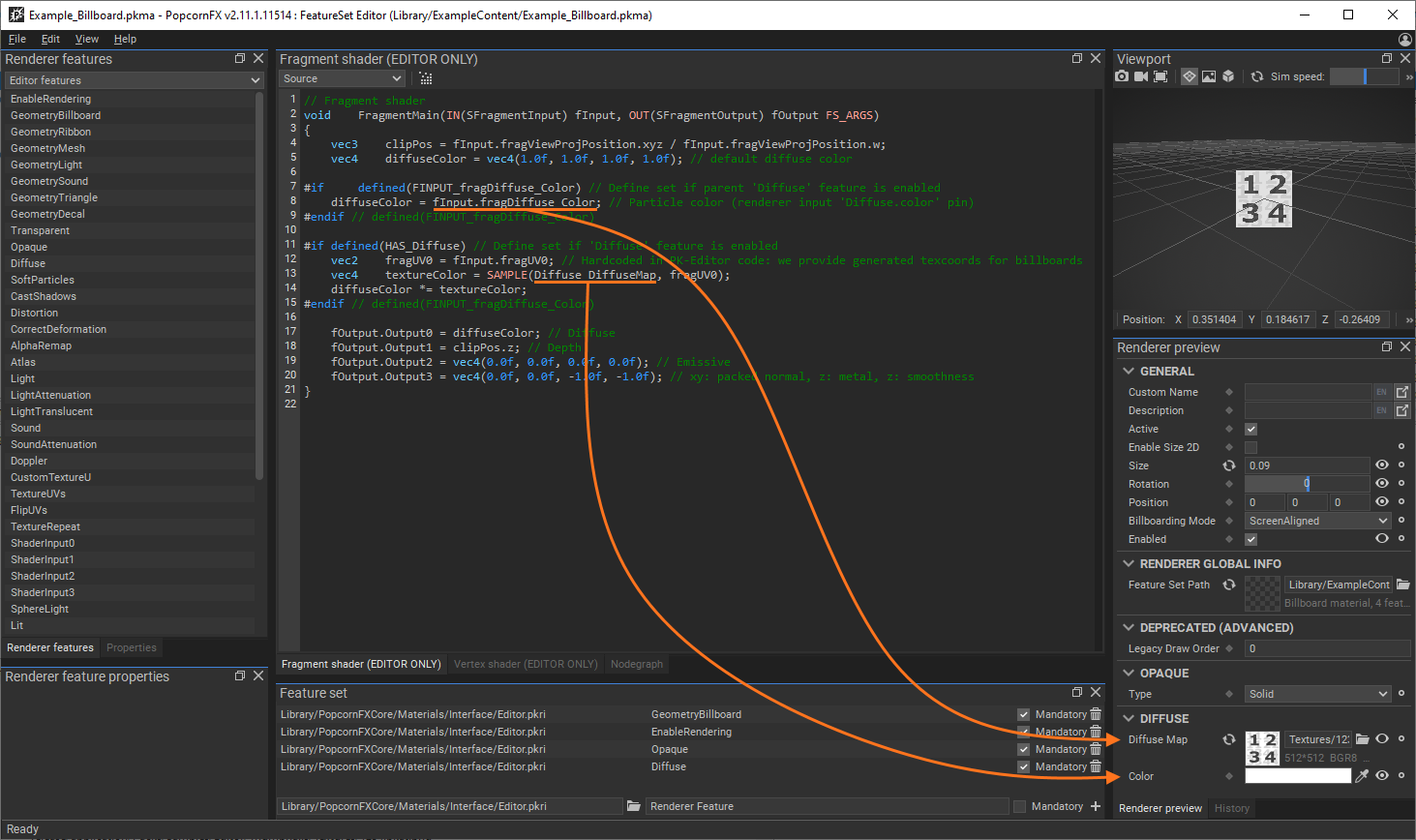 PopcornFX Editor has its own (undocumented) GLSL augmented shading language, with a series of macros (ie. SAMPLE) allowing you to retrieve per particle values, or draw call constants.

You can leverage #if defined(HAS_*) checks in your shader to detect if a rendering feature was enabled or not by the VFX artist on the renderer node: 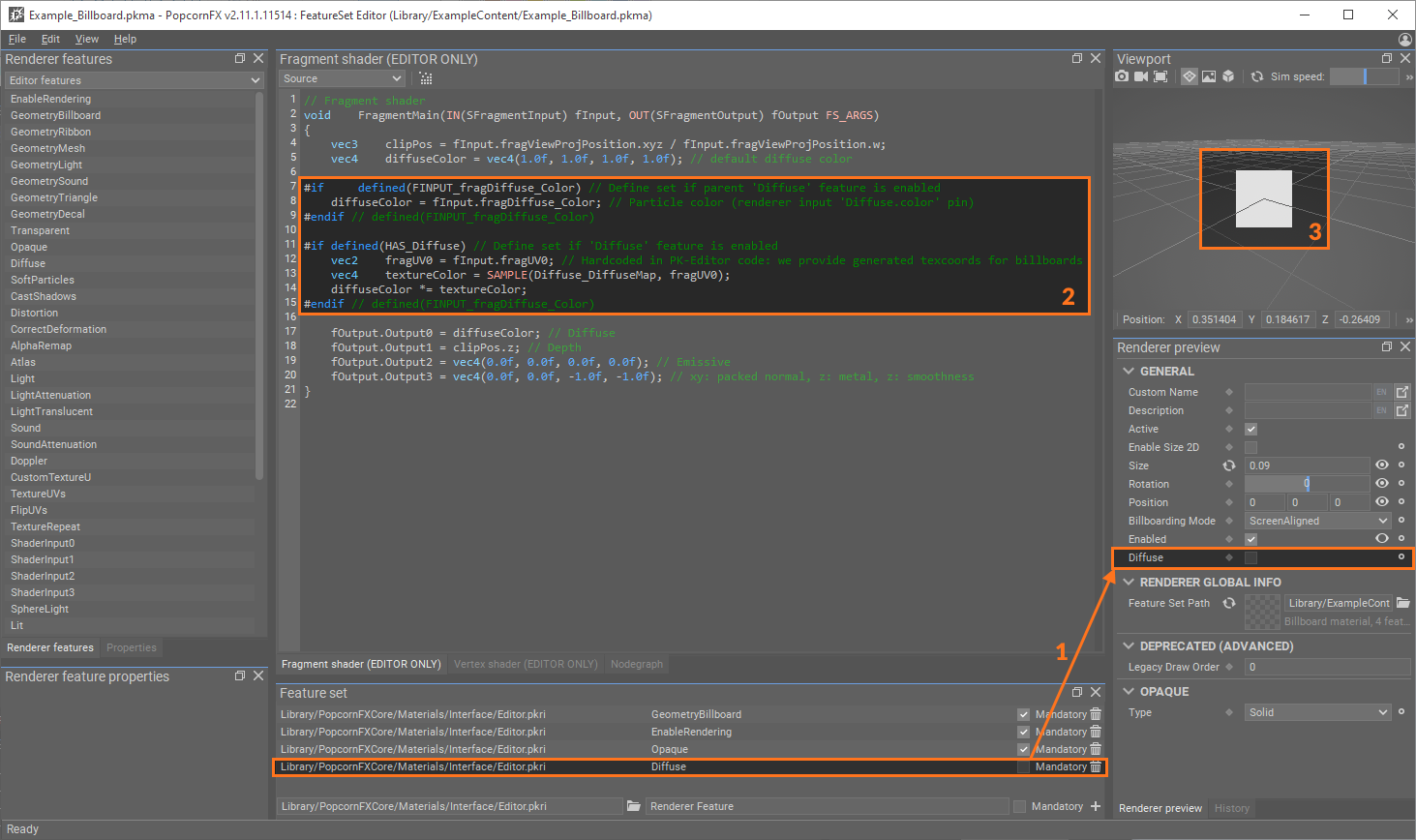 As Diffuse is now optional, two shader permutations are generated, you can inspect each: 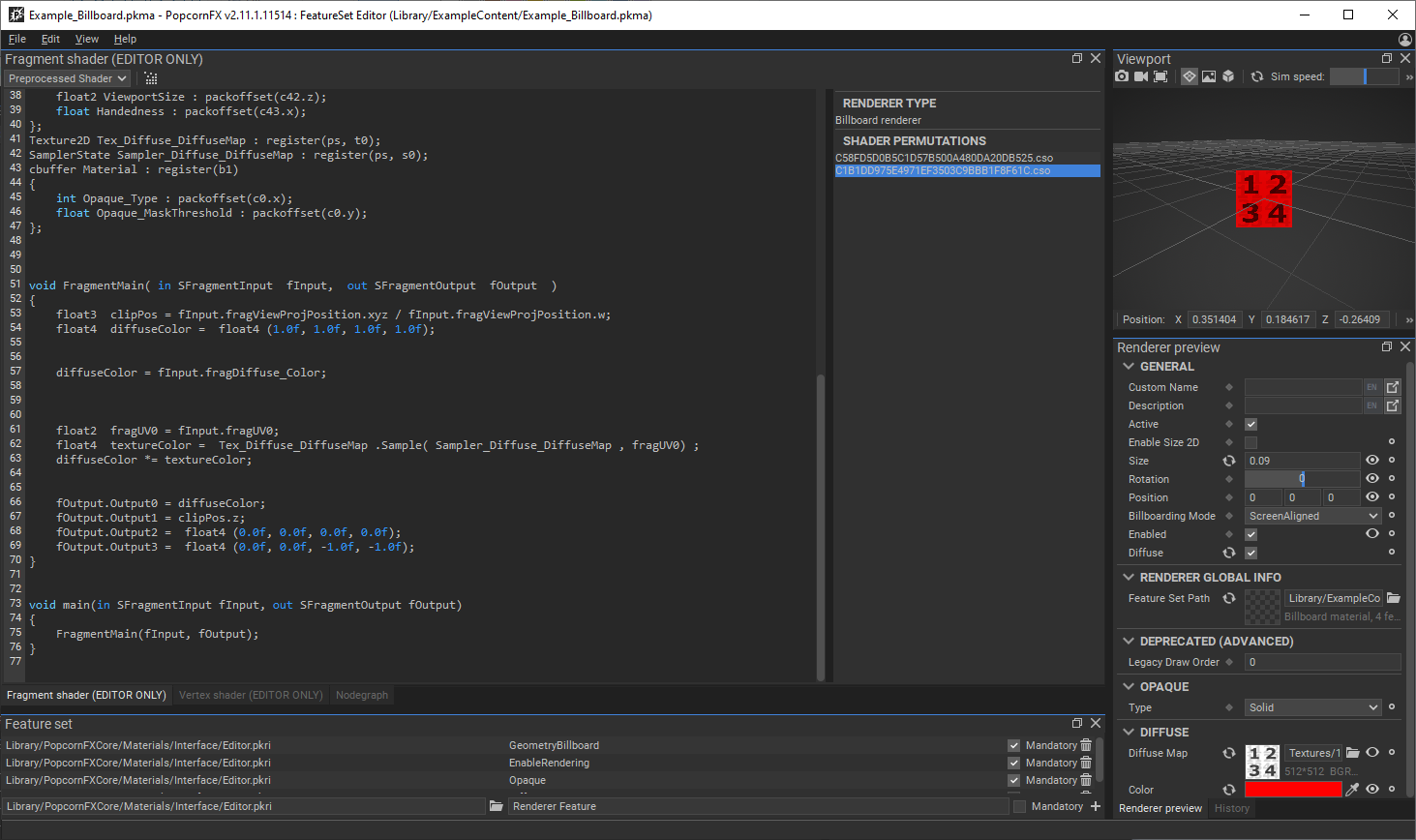 As mentioned, it’s best to create a specific folder for your production(s) that will contain all public templates, materials, common content.

Currently, there is no way to specify project wide what material is picked up by default when creating a particle renderer. Right now it defaults to Default_RendererType.pkma

This is something that can be addressed easily by creating your own renderer presets, using the “Inlined templates” system.

We’ll be using the same example folder structure, creating a new folder for templates, and an effect file containing them: 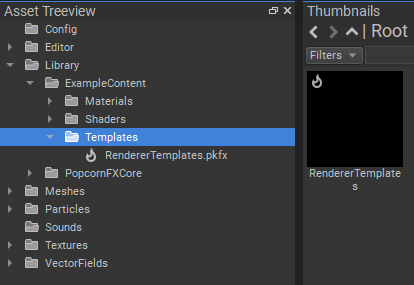 Opening that effect file, you can create a template, with the following settings: 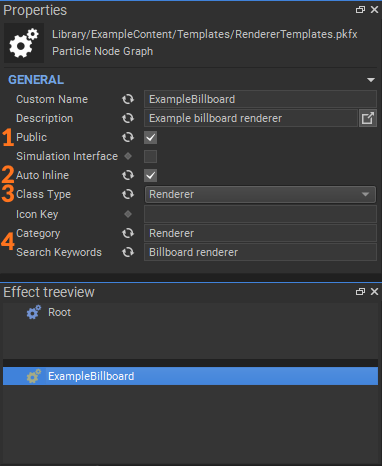 Opening the template, you can now create a single billboard renderer, with the Feature set applied: 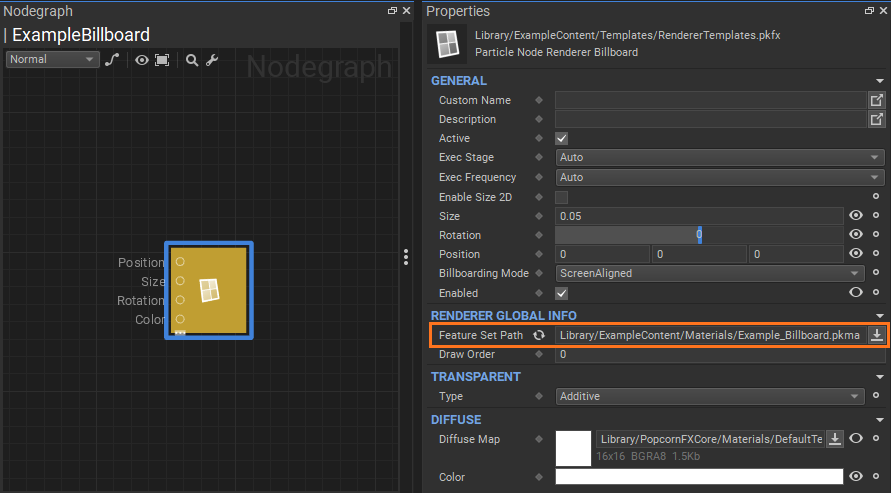 Once this is done, you can save and quit this templates file, opening an example effect, opening the contextual menu now properly lists our template as it’s public: 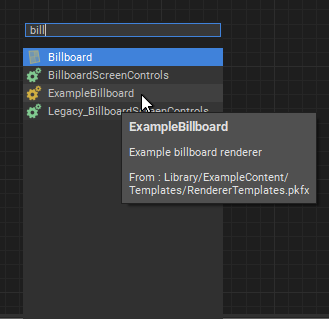 Selecting our template, its content is inlined instead of having a regular template instance placed in the graph: 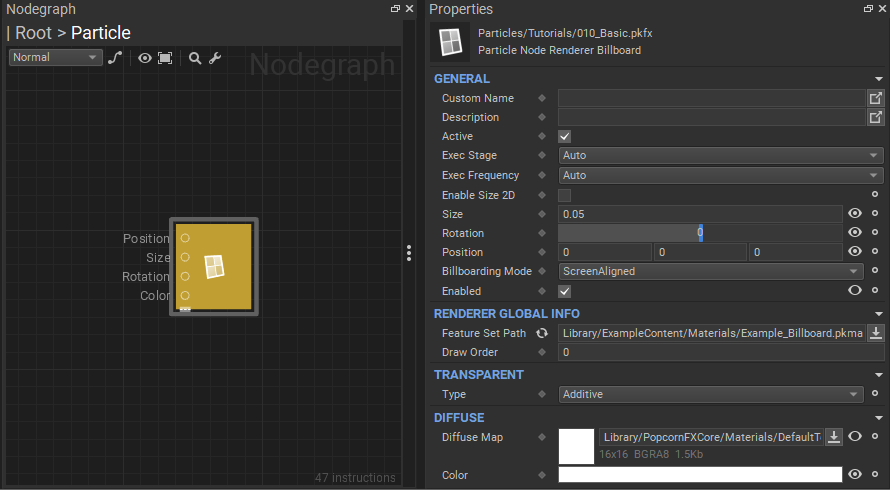 This setup is ideal so artists work with your materials and renderers.